Be the first to get the vinyl of these epochal recordings at Greve Studio Berlin from 4th to 6th of October 2021.

With the line-up of seven genius musicians:

There are no more topics, the immediate interpretation of what is currently happening applies. The parameters of counterpoint are expanded by sounds, moods and density of texture. - DBL BTR 4TET Tribal Error (CD) Studio Berlin 2021

Rieko Okuda is a pianist and composer. During her stay in the USA she performed with Marshall Allen (Sun Ra Orchestra), Elliott Levine and Calvin Weston and at various festivals. Her interest in improvised music led her to Berlin. In the meantime she has become an integral part of the Berlin improvisation scene.

Arvind Ganga (e-guitar, field recordings, objects) is a guitarist from The Hague, Netherlands. He takes a physical approach to guitar playing, using objects and advanced techniques to explore new sonic territories. His music draws on influences as diverse as noise and drones, north Indian ragas, experimental rock and everyday sounds. In free improvisation, he combines them into an intense, loosely structured, chaotic network that bathes in the rays of a deep red sun.

Norbert Stammberger (saxophones, electronics) runs the KlangBüro in Munich, a sound art concept, network for noise, noise music and NO music for the collection of unheard-of and desired sounds. He works internationally with his own ensemble Mambo Varèse (Munich / Kyoto / Izmir), Torino Blackout DBL BTR (Turin / Copenhagen / Berlin) and Tribal Error DBL BTR (Munich / Ljubljana). The Duo Stammberger Okuda has already recorded 5 albums. In 2019 Norbert Stammberger was with his solo program at the Roaring Hooves Festival in Ulan Bataar, Sainshand and Kharakhorum in Mongolia.

For 2018, Norbert Stammberger received APPLAUS cultural funding for culturally outstanding programs in the HOUSE CONCERTS concert series. With his solo CD Poem X, code 55-64, he is on the longlist 2-2019 of the German Record Critics' Award.

With her projects she released several CDs on labels like Pirouet and cleanfeed.

She has been awarded numerous prizes, including the first prize at the Concours

Competition 1996 and the Studio Prize of the Berlin Senate. Taiko Saito was a juror for the Concours International de Vibraphone. She gives master classes and workshops in Japan, Europe, Colombia and the USA.

Antti Virtaranta (e-bass) is a bassist and composer and currently lives in Berlin. He focuses on expressing his voice in music and sound through composition and improvisation. His musical language is formed from his influences from jazz and rock music and self-taught contemporary music.

freelance sound person specialized in live and studio applications for loud and extreme music as well as free improvisation, free jazz, electroacoustic and experimental music. He worked with bands and musicians and numerous others.

Marcello Busato (drums) is a multi-instrumentalist from Milan, Italy. In 2003 he moved to Berlin and has since become a prominent and sought-after member of the Berlin improvisation scene. 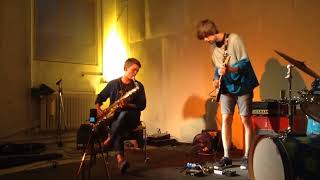